Right off the bat I have a confession to make. I don’t like the reboot of Battlestar Galactica. I saw the pilot, saw that ending and thought “Yep, not for me”. I am writing this as a disclaimer so you know I am not a fan of the series. Yet I really enjoyed Battlestar Galactica: Deadlock (though with some reservations).

If I don’t like Battlestar Galactica, why did I pick the game? Well it was for sale with a couple of good pieces of DLC for a cheap bargain on Steam and it reminded me of Battlefleet Gothic: Armada, one of my favorite games of all time, so I took the risk. I don’t regret it.

So what is Battlestar Galactica: Deadlock? In simple terms its a turn based tactical combat game with some strategy elements. No, I am not confusing the order of things and the review will make this quite clear. The player builds and controls colonial fleets as they engage the Cylons (frakking toasters!) both in skirmishes, side and mainline stories.

The strategic elements boil down to fleet composition, build queues, fleet positioning, research, officer recruitment and mission choices. The map itself is quite small so there is not a lot of space that needs covering. Not a lot of meat for a true strategy enthusiast. That said this level of shallowness makes sense when you realize the main meat of the game is the tactical combat. 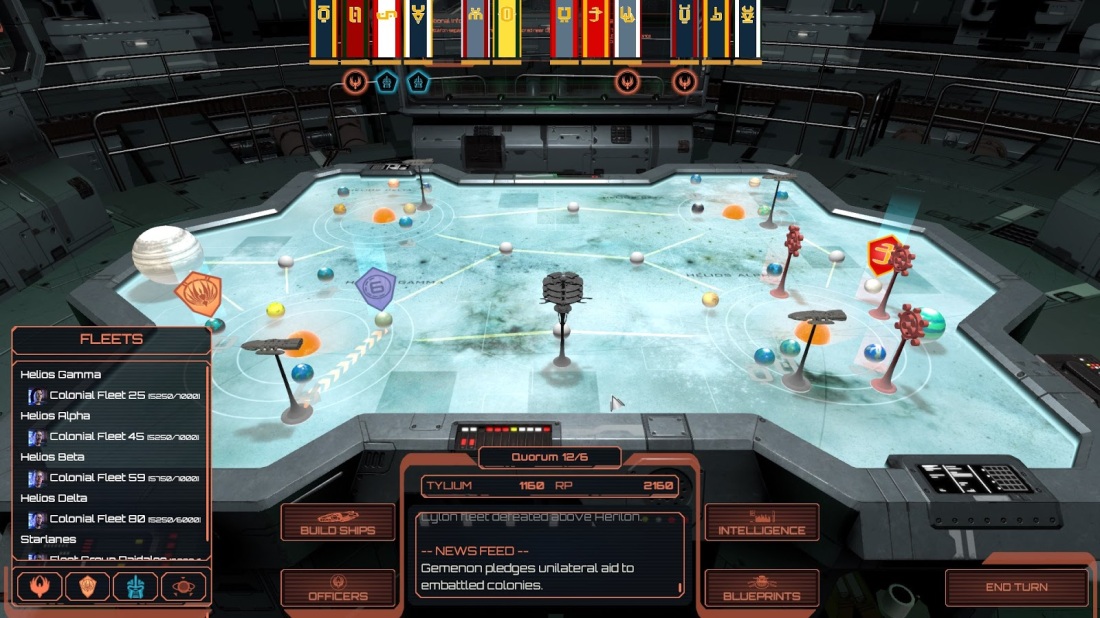 Battles start with a deployment phase where the player positions their ships in an initial formation before their turn starts. From then on, the player has to decide on their ships’ actions in a planning phase before ending their turn to see it play out in real time for roughly 10 seconds intervals. Once the enactment ends their turns begins again. As combat systems go its not the worst and I found myself quite immersed in it.

Combat in the game is quite deep thanks to the range of ships and munitions available, not to mention the physics behind them. Ships differ from each other in mass and thrust, meaning nimble frigates can turn on a dime compared to ponderous battlestars that require several turns to execute a similar 180 degrees maneuver. Whats more, the battlefield is three dimensional, adding verticality. Guns are locked into arcs and angles of fire, meaning turrets on the top of a battlestar wouldn’t be able to hit enemies below it and so forth. This makes positioning very important.

Another factor in positioning is ships’ armor. Ships have hull and armor hit points. Armor is distributed across a ship in sections, with its thickness differing according to the ship’s design. One example is the Jupiter class battlestars, which boasts thick frontal and side armor but is very thin in the back. Once the armor of a section is destroyed, the ship’s hull takes damage. Worse yet, depending on the section the ship’s sub systems could also receive damage.

The sub systems basically govern all of the ship’s functions. Navigation, to give one example, is located at the aft section of a ship and is responsible for speed, i.e. distance the ship can traverse in a turn. Should it take damage, the ship’s ability to cover distance will diminish. Sub systems have fixed hit point but thankfully can be repaired during combat, unlike armor. Officers can also buff the hit points of specific sub systems.

All of this leads to a complicated dance as the player tries to position their ships so the thickest part of the armor will absorb hits while at the same time trying to get the maximum number of weapons to bear on hostile ships. To aid in this the game introduces a posture slider. Defensive posture minimizes weapon range but helps in repelling boarding action as well as better damage absorption while aggressive posture increases the range and effectiveness of the ship’s guns. Both decrease the ship’s maneuverability.

Besides guns various ships have secondary and tertiary munitions. Most ships will have missile tubes that can be armed with guided missiles, torpedoes, mines and chaff (you can also unlock nukes latter on in the story). Certain ships like the battlestars are equipped with hangars that can house fighters. Vipers can shoot down missiles, raiders and attack capital ships. Raptors are able to board hostile ships or boost the firewalls of friendly capital ships. Each ship can be tweaked to further suit the player’s or mission’s needs.

For these reasons the game locks fleets to seven capital ships maximum with a further point cap (which can be increased via officers). That said considering how hectic, especially in the latter game, battles can be I don’t see this as an issue. During the game I had fun experimenting with various builds, tweaking them as I went along. The constant escalation of force was interesting and quite thematic.

That said the Cylons themselves outside the main missions are not really that difficult and even there were mostly a threat due to overwhelming numbers. That said they still managed to pull a surprise or two on me by introducing hard counters to certain tactics I was employing up until that point. Add to that certain ships’ annoying ability to hack sub systems directly and thus damage them without firing a shot and underestimating them completely will prove fatal.

I found the story itself quite satisfying. The game itself is set approximately 50 years before the show and that is evident in some of the Cylon ships’ designs (not yet the sleek basestars shown in the series but getting there). The player assumes the role of second in command of the colonial fleet after the admiral alongside the battlestar Galactica went missing and the main shipyards were destroyed by a Cylon attack.

Starting from such a low point, the story mostly revolves around beating back the Cylons and securing the loyalty of the 12 colonies, not all of which are on board the initiative. I also had the Broken Alliances DLC installed which adds a few more missions further fleshing these divides within the Quorum of Twelve (the colonies’ ruling body). The story itself is presented in mission briefings, cutscenes and voice overs during the actual missions. The voice acting itself is quite good.

Added to it is good sound design coupled with a great soundtrack which is evocative of the TV series itself. The fact I can recall most pieces and can say with certainty “Thats from Deadlock!” is a point in the soundtrack’s favor.

Another great feature is the replay camera, which is able to transform hectic battles into cinematic masterpieces. I really am in awe of the technical accomplishment alone. That said I didn’t really use it too much but I thought I should recognize the feature.

All told it took me some 40 hours on the easiest difficulty story to finish the story including the DLC content and as I said in the opening paragraph I found it wholly satisfying. However I also wrote that I had some reservations and I am going to lay them bare.

I am not going to criticize the shallow strategy part because as I said before, the game revolves around the tactical combat. The problem is there is too much combat. Outside the main missions most secondary missions and skirmishes quickly devolve into senseless repetition, not helped by the AI as I noted above. It feels like too much filler and it nearly caused me to step away from the game. In fact had I not wanted to write on the game, I would have quit by the end of the second act rather than have powered through all of it and had missed a lot of content (and possibly gave it a much lower score).

The second problem is that of progression. While officers gain experience through battle and can be also promoted via requisition points, ships remain static. Sure you can tweak ships later on using researched items but there is no real progression for the ship itself. A veteran ship and a newly built one don’t differ in any way besides the armor scaring (which is a small detail I really liked). It makes ships disposable.

This leads me to the third issue, and that is the lack of a scuttling option. As the game progresses the player unlocks and builds better ships and with the fleet cap, will often discard earlier designs but its impossible to scuttle these ships. I myself ended with dozens of unwanted ships I used to either fortify planets or force fed the Cylons with. Quite going against the theme.

Last but not least is the UI. The UI in this game is clunky. It is uncomfortable and with just a few tweaks could have been much better. As it is, it just gets in the way at times and frustrates, which damages my overall enjoyment of the game. I know it sounds like a petty niggle but considering the playtime it really adds up to a major annoyance.

This leads me to the summary. I have a sneak suspicion that had I been a fan of the show and hadn’t played Battlefleet Gothic: Armada which came out a whole year before it, I’d have rated the game much higher. That said, considering everything I wrote above, I feel content giving it a 7 out of 10. 7 is quite a good score, putting it above average but just not as good as it could have been thanks to the issues I raised in the review. Still I’d recommend it for its combat and story but with a warning regarding UI and repetition.

Salivan Harddin has been writing about EVE Online since 2013, covering battles from Cobalt Edge to Period Basis and some of the biggest wars ever fought in the game. View all posts by Salivan Harddin